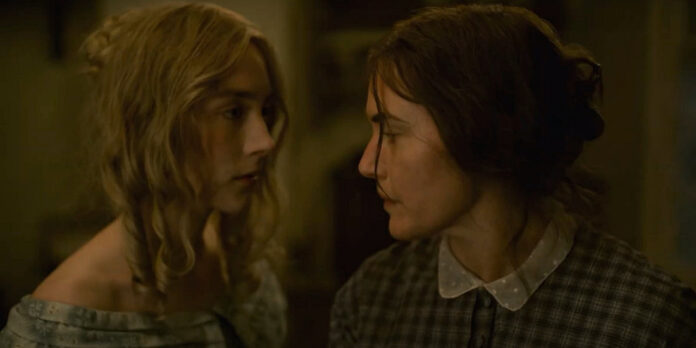 THE STORY – 1840s England, acclaimed but overlooked fossil hunter Mary Anning and a young woman sent to convalesce by the sea develop an intense relationship, altering both of their lives forever.

​​​​​​​​“Ammonite” is the common name for a group of extinct marine molluscs marked by their signature planispiral shape – the center of the tightly-coiled spiral is small, but as it grows farther out, it becomes wider. Ammonites are also good index fossils, meaning they are used to identify and define geologic time periods. And so it is with Francis Lee’s film “Ammonite” – it can easily be identified as a film that was both made in and takes place in a very specific time, and its central characters start very small and grow the further they get from their center.

Saoirse Ronan and Kate Winslet star as Charlotte Murchison, wife of British geologist Roderick Murchison, and British paleontologist Mary Anning, respectively. In the 1840s, Mary lives with her elderly mother in Lyme on the southern English coast. They run a shop where Mary sells the shells and fossils she finds on the coast, where Roderick finds her, first hoping to learn something from her and then hoping she will allow Charlotte to do the same to overcome her melancholia after the loss of a child. The two women are rather closed off from each other at first, but when Charlotte falls even more ill, Mary nurses her back to health, and their relationship grows.

Watching Winslet and Ronan navigate the process of slowly coming alive in each other’s presence is a pretty incredible thing to behold. Winslet in particular has never given a performance quite like this, dialing back her natural allure until she looks like a flower actively trying to keep its bloom closed until she receives a touch that causes her to open up. Mary is a woman who has closed herself off from the world so much that her heart is in danger of becoming just another fossil in her collection, and when Charlotte is able to crack it open, Winslet shows us every piece of herself in glorious ways. Ronan’s Charlotte is similarly closed off at the start, reeling from an indescribable loss and stuck in a marriage to a man who has replaced his interest in her with an interest in rocks. But as she recovers, she allows her pain to come tumbling out, crashing against Winslet’s rock like the waves along the coast, and allows it to be replaced with a new kind of love and a fresh boldness that belies her fragile frame.

This duet between two of our finest actresses is always compelling to watch, and Lee shows a similar sensitivity towards the characters as he did in his first feature, the fantastic “God’s Own Country”. Here, as in that earlier film, nature seems directly linked to the inner lives of his protagonists: At first, the shoreline of Lyme is rough and jagged, with rough seas, painted in various shades of grey and beige. But after Mary and Charlotte have opened up to each other, the waves have calmed, the sun has come out, and everything is brighter and more vibrant. Michael O’Connor’s costumes also play with the growing bond between the two women, bringing the color and style of their clothing closer together as they connect more. Volker Bertelmann and Dustin O’Halloran’s sparingly-used score comes in at just the right moments to make an impact.

As a whole, “Ammonite” feels more in line with the characters as they begin, rather than as they end. It is reserved and restrained, never reaching for unnecessary drama or embellishments. Lee keeps this tone all the way through, never allowing the film to fully bloom as the characters eventually do – instead of widening as it moves outward from its tight center, it stays the same. That Lee manages such tight control over the film’s tone is impressive, and it makes sense, in theory, considering the film’s setting. But in practice, it blunts the force of the film’s emotional impact, causing the film to go out with more of a whimper than a bang. Masterful as the final cut of the film is, it needed one more scene between Mary and Charlotte to become the best version of itself. The film’s restraint is admirable, but the distance from which it watches these characters grow keeps their passion from fully reaching the audience. Much like a fossil, we’re left with the impression of the thing, not the thing itself.