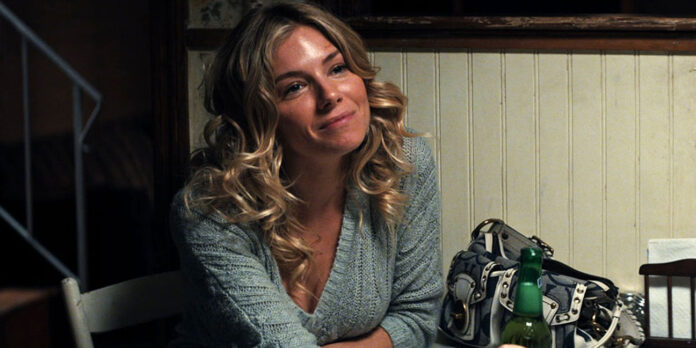 THE STORY – In a small blue-collar town in Pennsylvania, a 32-year-old woman’s teenage daughter goes missing, and she is left to raise her infant grandson alone.
​
THE CAST – Sienna Miller, Christina Hendricks, Aaron Paul, Will Sasso, Pat Healy & Amy Madigan

​​​​​”American Woman” (Not to be confused with another film by the same name starring Hong Chau) is a heart-wrenching character study of you guessed it…an American woman. Taking place in present-day Pennsylvania, the film is an honest depiction of one working-class woman’s struggles through life. Some of them are relatable. Some of them are distant. And some of them are so horrific that we cannot even begin to possibly comprehend. With deeply empathetic performances and a sure hand from legendary director Ridley Scott’s son Jake Scott (“Welcome to the Rileys”), this tiny independent film makes one woman’s experiences feel both personal and shared.

Debra (Sienna Miller) is a small-town waitress who has a bad reputation around town over the years, having her own daughter when she was just 16 years old. Now a young 32-year-old grandmother with a rough history of erratic behavior and poor choices outside of raising her daughter and her grandson, Debra’s entire world comes undone when her daughter Bridget goes missing.

When discussing “American Woman,” the conversation needs to start and it needs to end with Sienna Miller. Often overlooked but nonetheless, reliably consistent in her career, she finally receives a role that she can sink her teeth into and tear up the screen with. Much like Elisabeth Moss’s character in “Her Smell” from earlier this year, we watch Debra Callahan change through the course of many years and hardships. Miller carries with her a guilt that feels tremendously weighted though as if it threatens to suffocate her very existence if it were not for her family members who co continuously support her through faults of her own and those brought onto her by forces beyond her control.

Christina Hendricks, playing Debra’s sister Katherine, along with her husband Terry (Will Sasso), have to act as a pillar of strength for Debra, in less showy roles. However, they both rise to the occasion and round out a central ensemble which also includes a phenomenal Amy Madigan as Debra and Katherine’s mother, Pat Healy as a controlling and abusive lover to Deb, Aaron Paul as a new love interest in Deb’s life at a time when she feels she doesn’t deserve happiness anymore and E. Roger Mitchell in a short but impactful role as a detective assigned to Bridget’s missing persons case. Each of them does the work that is required of them without overshadowing each other. But more importantly, they each give Sienna Miller a tremendous amount of subtle work for her more colorful, distressed and commanding performance to bounce off of. We may not like Deb when we first meet her but it’s because of her strength, her complexity and the love and support from those around her that we too eventually grow to love and root for her to find happiness.

The screenplay by Brad Ingelsby does not exactly go where one would expect. At first, we’re led to believe that this will be a kidnapping thriller in the same vein as “Prisoners” but instead, it’s more of a deep psychological character study of a woman’s pain and strength, with all of the messiness of life thrown in. It’s both a strength and a detriment for the moving personal story, as the work by Miller is so strong it helps to ground everything within realism, demanding our empathy throughout and resulting in what is undoubtedly the best performance of her career. However, there are long stretches where the film loses its momentum in the third act and it becomes unclear just where exactly the story of this woman is heading. Turns out, she doesn’t know either but she knows she needs to keep on moving forward no matter what.