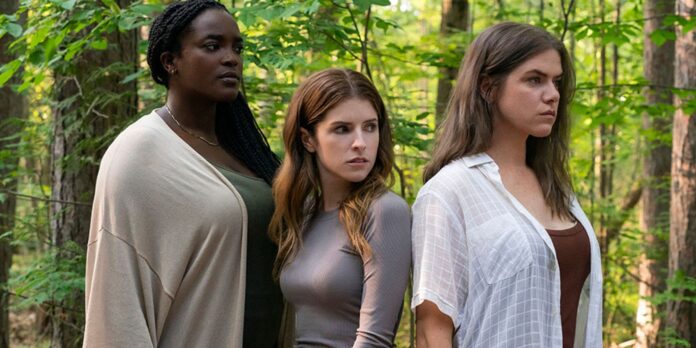 THE STORY – Pushed to the breaking point by Simon, her psychologically abusive boyfriend, Alice rediscovers the essence of herself and gains some much-needed perspective while on vacation with two close girlfriends. However, Simon’s vengeance is as inevitable as it is shattering, and once unleashed, it tests her strength, her courage, and the bonds of deep-rooted friendships.

Anna Kendrick’s comedic and singing chops are undeniable as they’ve been highlights of films like “Pitch Perfect,” in which she plays a first-year college student who joins an eclectic group of female singers, and “Into the Woods,” where she brings a new Cinderella story to life. But Mary Nighy’s “Alice, Darling” has unveiled a new side to Kendrick’s acting abilities. Instead of leaning into her solid comedic timing, the film allows the Academy Award-nominated actress to dig deeper and give one of her most emotional performances to date.

“Alice, Darling,” written by Alanna Francis, is a meditative and sensitive film that focuses on the brutal realities of an emotionally and psychologically abusive relationship. It’s easy to think that someone would be able to leave this kind of relationship if they found themselves in it. But once caught up in it, they might feel like there’s no other possibility for them or be fearful of what could happen if they tried to leave. Caught in the middle of one of these spirals is Alice (Kendrick), and the effects of the abuse she endures ring loud and clear through Kendrick’s stirring performance.

On the surface, Alice’s life looks perfect. She and her boyfriend, Simon (Charlie Carrick), a talented artist, live a trendy and posh life that many would want. However, it’s clear something is off from the beginning. Right when she wakes up in the morning, she rushes to the bathroom to put on makeup and fix her hair before Simon can get a glimpse of her. During a dinner with her friends Sophie (Wunmi Mosaku) and Tess (Kaniehtiio Horn), the pings of Simon’s text messages ring louder and louder, consuming her thoughts and keeping her from a fun night out. Even a waiter’s flirty exchanges make her nervous that Simon might find out somehow.

While Nighy and Francis respectfully don’t focus much on Simon’s abusive behavior – only showing a few flashbacks here and there where Nighy frames Simon as a dominating figure – we see the profound effects it has had on Alice. She twirls her hair so hard that strands of it come out, and she obsesses about the dangers of sugar. The most revealing moment in their relationship is when Alice is invited to spend a week with her friends at a lakeside cabin, but she tells Simon she has to go away for a few days for a work trip. Lying is the only way she knows she can go, and she even has to rehearse what she’s going to say.

At the cabin, Sophie and Tess can sense something’s not right with their friend as they notice signs of an eating disorder and witness a full-fledged panic attack when Alice loses an earring. Once she finally opens up to them, the friends try to guide her out of her situation. “But he doesn’t hurt me,” Alice says at one point, not recognizing that emotional and psychological abuse has hurt her for years. Kendrick delivers a meditative and moving performance, one of her best in years, and you can feel the hurt and weight she’s carrying when she thinks she’s not good enough. You can sense the tension in her body at the thought of doing something that would disappoint Simon. It’s chilling and hard to watch for many moments.

But rather than just focusing on the heartbreaking nature of Alice’s relationship, Francis’ script also chooses to show the importance and beauty of female friendships. At the start of the film, Sophie and Tess are annoyed with how flaky Alice has been and how she has changed over the years, but once they learn the truth, they become supportive and protective of their friend. And it’s not an over-the-top, cliché version of friends “coming to the rescue,” either. The three girlfriends listen to each other, build each other up and form an even stronger bond than they had before. Scenes where they’re reminiscing about their friendship or drunkenly singing together are beyond charming and feel so natural between the three actresses. Unfortunately, there are times when the film shifts focus to a missing person’s case, which largely feels out of place and distracting from the rest of the story.

Films about abuse can be difficult to capture in the most dignified way, but “Alice, Darling,” anchored by women off and on screen, manages to do just that. The film will linger with audiences thanks to a mostly solid and emotional script and three wonderful female performances, especially Kendrick’s. It might even give them tools to recognize signs of abusive relationships among their loved ones.

<b>THE GOOD - </b>Anna Kendrick delivers a deeply personal and intuitive performance, showing us a whole new side of her talents. Wunmi Mosaku and Kaniehtiio Horn stand out in their supporting roles. Alanna Francis' script is moving and very respectful, given the subject matter.<br><br> <b>THE BAD - </b>A side plot about a missing person's case distracts you from the main story.<br><br> <b>THE OSCAR PROSPECTS - </b>None<br><br> <b>THE FINAL SCORE - </b>7/10<br><br>"ALICE, DARLING"