A Masterpiece Of Noir: Looking Back At “Double Indemnity” 75 Years Later 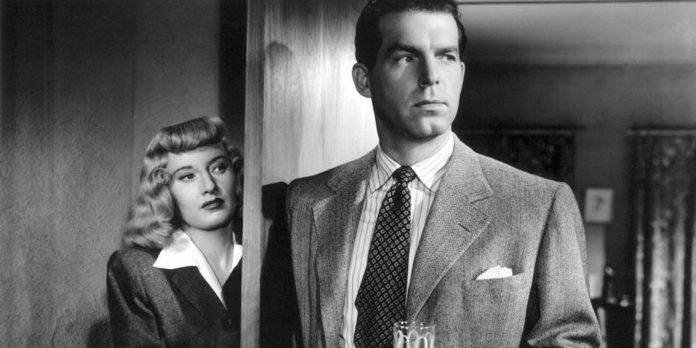 The 1940s is justly considered one of the greatest decades for American cinema, some of the best directors, writers and actors to have lived were working during this time and even though the Hays Code was in effect, the clever ones found ways around its limitations to make their films. Billy Wilder is one of those great directors, a demanding and cantankerous man who makes the AFI’s Top 100 an astounding four times, with only Alfred Hitchcock tying him for most contributions. For “Double Indemnity”, based on a novella by James M. Cain, he teamed up with Raymond Chandler to write the script. Chandler was a newbie to screenwriting at this time but was also a popular pulp fiction novelist who also happened to be in the process of rewriting what a mystery story could be with his noir-style detective tales. It took several difficult months of writing and years of negotiation with the authorities of the MPPDA to produce a film that could be released to the general public. But the product of all those efforts gave the world a landmark story that has inspired generations of filmmakers and novelists.

For those who haven’t seen the film, “Double Indemnity” is the story of an abused and neglected housewife who convinces an insurance salesman to take out a secret life insurance policy on her husband and then help her kill him. It stars the highest-paid actress at the time Barbara Stanwyck as the housewife Phyllis, Fred MacMurray who was known for his light and comedic fare as the insurance salesman Walter, and Edward G. Robinson who is a delight to watch on screen no matter his role as Barton Keyes, an insurance investigator who finds the whole affair of the husband’s death suspicious and also happens to be Walters boss. It sounds like an average film now, but at the time it was shocking content. Stanwyck’s Phyllis is a femme fatale who we are meant to believe seduces Walter the insurance salesman, but as it was nigh on unacceptable to show adultery in films at the time there is little physical affection between the two, the film instead relies on the original novellas sharp and witty wordplay to convey the relationship.

While the story of “Double Indemnity” sounds simple it winds its way through some complex relationships, especially the one between Keyes and Walter as two men who have a shared bond that is stretched and eventually broken by the events of the film. The scenes that happen between the three main characters are electric, all of them delivering their dialogue as though it were a knife to another person’s back. The small moments in this film provide all the character development and the grim ending feels like the realistic results of normal people attempting to commit a heinous crime.

“Double Indemnity” is tame by today’s standards, but for those who want to see how the noir film genre got its start, it has much to offer. The performances can match anything in today’s cinema and the thoughtful and snappy script brings a simple story to life with all the complexity of a more modern film. The limitations of the Hays code and the mores of the time demanded that Wilder and Chandler both push boundaries and reach deep within themselves to find a way to create a story that would fit the demands of the censors while still engaging and titillating audiences. For the fantasy fans out there, it is like reading Tolkien’s “Lord of the Rings” vs current fantasy, which has built on and developed the genre to a degree that makes it almost unrecognizable. So does “Double Indemnity” exemplifies the idea of an early noir crime film. As someone who grew up watching old films and fully appreciates the more simplistic ideas inherent in these early movies, this is one of the best and deserves every bit of recognition it has received over the past three-quarters of a century.

Have you see “Double Indemnity” before? If so, what do you think? If not, how come? And how quickly can you change that? Let us know in the comments section below or on our Twitter account.