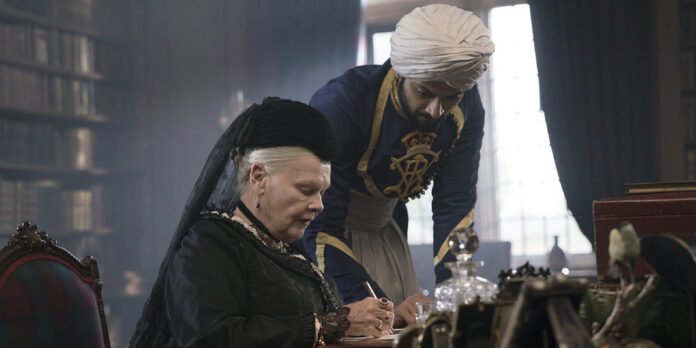 THE STORYAbdul Karim arrives from India to participate in Queen Victoria’s golden jubilee. The young clerk is surprised to find favor with the queen herself. As Victoria questions the constrictions of her long-held position, the two forge an unlikely and devoted alliance that her household and inner circle try to destroy. As their friendship deepens, the queen begins to see a changing world through new eyes, joyfully reclaiming her humanity.

​“Victoria and Abdul” is a crowd-pleaser about the unlikely friendship between Queen Victoria and Abdul Karim, an Indian man who ascended from menial labor in Agra to lofty status as a confidant to the Queen of England. Readers should now take a moment to gauge their reaction to the preceding sentence. If that synopsis piques your interest, then you will likely enjoy “Victoria and Abdul.” If the description sounds bland to you, well, may I divert your attention to “Battle of the Sexes”? Stephen Frears’ latest movie is a safe and unsurprising effort with enough charm to satisfy its target audience and not nearly enough spark to win over skeptics.

The plot is straightforward and loosely based on true events: Abdul Karim is one of two Indian clerks called by the British Empire to travel from Agra to Buckingham Palace to present a gift to the Queen during a royal ceremony. Abdul is viewed by all members of the Royal Household as nothing more than a servant whose presence is destined to be short-lived. The Queen herself, however, stunned her advisors by developing a close friendship with Abdul, eventually enshrining him as an integral member of her household for 15 years. Abdul provided the Queen with spiritual guidance and companionship, and he carried significant influence despite the many angry protests of the Queen’s associates, all of whom chastised Her Majesty for disrupting traditional notions of power and privilege.

“Victoria and Abdul” has its heart in the right place, and it tells an inspiring story. Unfortunately, the movie’s emotional impact is muffled by its dullness and predictability. Stephen Frears (“The Queen,” “Philomena”) directs with visual flair, but the Lee Hall screenplay suffers from an abundance of on-the-nose schmaltz. The movie paints Queen Victoria as a beacon of egalitarian virtues; its characterization of the Victoria-Abdul dynamic feels sanitized for popular consumption. The relationship between Victoria and Abdul is worthy of cinematic treatment, but it deserves a higher degree of scrutiny.

The acting here is of varying quality. Dame Judi Dench is an actress of undeniable stature, but she delivers her most exhilarating performances when she escapes from the confines of royal gowns and plays around in a contemporary environment (“Notes on a Scandal,” “The Best Exotic Marigold Hotel,” any of the Bond films). Dench clearly has an affinity for period pieces, though, and she returns to the genre in “Victoria and Abdul.” As Queen Victoria, Dench exudes playful verve, but one cannot help but wish that she gravitated toward fresher content. Her costars all succumb to hyperbolic emoting. Ali Fazal paints broad strokes as Abdul, and he does not show much beyond Abdul’s external emotions of happiness in the presence of British royalty. Surely, Abdul must have experienced a complicated range of feelings during his fifteen-year tenure as Victoria’s “Munshi,” but Fazal – and the movie’s screenplay – only focuses on a couple. The actors who play the members of the Royal Household, including Eddie Izzard as the Prince of Wales and Michael Gambon as Lord Salisbury, do little more than raising their eyebrows and contort their faces in shock. The exaggerated performances mirror the film’s attempts at comedy, which aim for big laughs without pinpointing the nuances of what makes the situation comedic.

“Victoria and Abdul” is a harmless and minor entry in the crowded early-fall movie landscape, and it will no doubt be appealing to large swaths of filmgoers. It is, nonetheless, a missed opportunity, a middle-of-the-road swing at material that was ripe for something more ambitious.