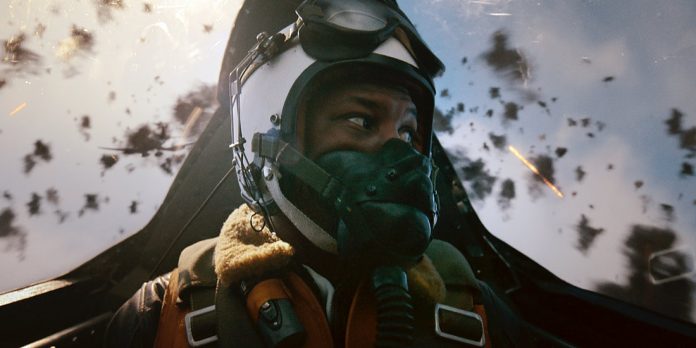 By Matt Neglia
​
Sony Pictures has released the trailer for J.D. Dillard’s “Devotion,” starring Jonathan Majors, Glen Powell, Christina Jackson, Thomas Sadoski & Joe Jonas. The film will have a limited release on October 14th before expanding on October 21st and then going wide a week later on the 28th.​

​Plot Synopsis: An aerial war epic based on the bestselling book of the same name, tells the harrowing true story of two elite US Navy fighter pilots during the Korean War. Their heroic sacrifices would ultimately make them the Navy’s most celebrated wingmen.

What do you all think of the trailer? With two good films under his belt, J.D. Dillard has proven himself to be a formidable talent with “Sleight” and “Sweetheart.” His latest looks to be his biggest film yet, and with the October release date and maybe a bit of awards potential behind its true story of friendship and heroism, this might get a world premiere at the Toronto International Film Festival. We’ll have to wait and see on that, but until then, it’s nice to see Jonathan Majors in another lead role following his outstanding turn in Netflix’s “The Harder They Fall.” A similar sentiment is shared with Glen Powell, who looks like he’ll be stepping back into a fighter plane’s cockpit again following his supporting role in “Top Gun: Maverick.” The action and overall aesthetic of the film look brilliantly shot by cinematographer Erik Messerschmidt in what is his first feature film since his Oscar win for “Mank.” What do you all think, though? Let us know your thoughts in the comments section below or on our Twitter account.