“THE OTHER SIDE OF THE WIND” 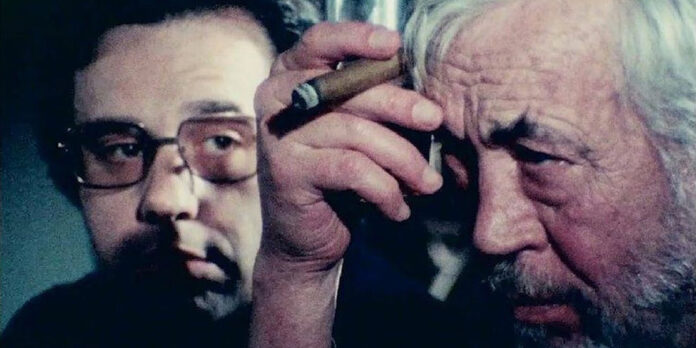 ​​​​Most cinephiles would be hard pressed not to know about the dazzling achievement that was set out to complete an abandoned project from one of history’s greatest filmmakers. The journey to get this film in front of audiences is one that has been raging for over forty years, and many have waited with bated breath to discover what has evaded the legendary Orson Welles for so long. Finding the results of this process could lead to a great finding of some unearthed treasure. It could also provide a tedious exercise that plays more to clinical examination rather than engrossing storytelling. For me, the latter camp is unfortunately where I fall more into.

The plot for “The Other Side Of The Wind” centers around the 70th birthday party of Jake Hannaford (John Huston). Hannaford is a boisterous, flamboyant personality with a long career as a film director who is facing financial difficulties completing his latest project. The party is used as an opportunity to attract investors and complete funding. His wildly experimental film, taking heavy cues from new Hollywood era filmmaking, is screened and intercut throughout more drama happening off the screen. In particular, his main actor (Bob Random) that has disappeared from set and the relationship with his young protégée Brooks Otterlake (Peter Bogdanovich) is becoming strained. It’s a long night where Hannaford hopes to find some personal resolution by the end.

Hannaford’s party offers a conceit of what feels like hundreds of people descending to his property, many with cameras and tape recorders in hand. This creates a documentary style to the film, almost like an early prototype for “found footage.” It does aid in the sense of intimacy, but at the same time, the jarring and disorienting cuts also make it feel like an endless collection of B-roll footage. It certainly does help to place oneself in the chaotic mindset most of these characters inhabit, but it also makes the plot’s momentum difficult to build up. The score by Michel Legrand does help to keep up the pace a bit, acting as a sort of glue to keep the film together.

Still, one would be foolish to underestimate the talent and mindset of a filmmaker like Welles. Being deceased for over thirty years does not undermine the artistic flourish of his skills. Even in this cobbled together state, there is an appreciation to be had. A lot of the imagery is well composed, particularly in the film-within-the-film. All of that plays in service to a story that clearly has an eye for meta-commentary about the status of Hollywood and the façade it shows the world. Often times, however, it never quite lands in a meaningful way, and dialogue that tries too hard at cleverness is usually employed, and mileage may vary on its success. Ultimately, it is guesswork by outsiders to determine Welles’s true intention for execution, and knowing that always prevents a barrier from becoming truly engaged with the storytelling. As a side note, there is also a healthy amount of dated terminology and slurs that one must make an adjustment to hearing in flippant contexts. It paints a portrait of another time, but it is an element to be aware of.

With an ensemble this widespread, it can be difficult to single out performers that are worthy of particular praise. At the same time, it’s rather undeniable to have Huston go unnoticed here. What’s interesting is that there really isn’t anything particularly singular about his portrayal here. Still, there is just a natural magnetism to his screen presence, and he can make even the clunkiest of dialogue and lamest of zingers sing with his raspy voice and immeasurable charm. Bogdanovich is probably the only other real notable member of the cast, and he’s a warm presence indeed, especially with his charming impressions. However, he does get lost in the sea of people here at times. That’s the major complaint throughout the film, as this busying collection of characters never finds enough time to particularly shine. There’s a lot of names here, but not a lot of opportunity to make the most memorable of impressions.

I can imagine for aficionados of Welles’s filmography, this will be essential viewing. It would even be a curious oddity to take a look at just in terms of cinematic history. However, I’d imagine it would be difficult for some to view this film as anything more than the latter. It really is hard to escape the notion of the long process it took to assemble scattered bits of footage into a completed film more than four decades after its intended release. There is an appreciation for Welles’s craft as a filmmaker and storyteller, and even the sparse performances that make an impact are sincerely felt. But the film’s execution always feels distant and rather detached. I know there are many that will love this exploration and all the more power to them. Personally, it was an experience I’m glad we all could share but it never approached anything worthy of its delayed premiere.