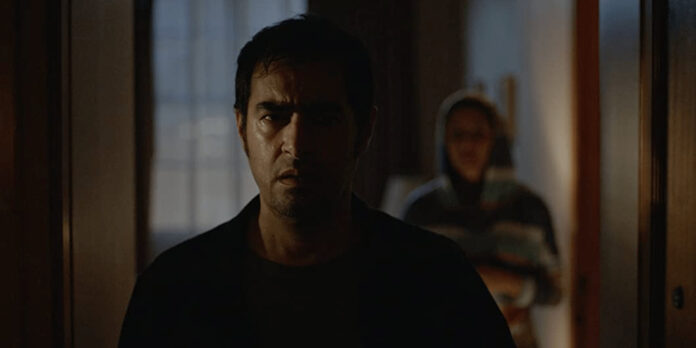 THE STORY – A couple becomes trapped inside a hotel with their demons – real and imagined – until they can confront the secrets of their marriage.
​
THE CAST – Shahab Hosseini, Niousha Jafarian, George Maguire, Elester Latham, Michael Graham & Armin Mehr

As the film’s title suggests, “The Night” takes place over a single horrific evening. The married couple who serves as the dual protagonists, Babak (Shahab Hosseini) and Neda (Niousha Jafarian), pull over after a GPS malfunction and decide to hole up in a nearby hotel. The act is common enough, but the hotel they happen to choose, the Hotel Normandie, is anything but. Before long, the couple is fighting for survival and their sanity amidst the hotel’s seemingly endless corridors.

A film like “The Night” is bound to draw comparisons to “The Shining” (1980) with its hotel milieu and sinister use of torch songs (Helen Kane’s “I Want to Be Loved by You” lingers throughout the film like a secondary theme). It’s to the film’s credit that the similarities largely end there. “The Night” isn’t interested in over-stylized violence but in using the tropes of the horror genre to explore the dynamic between the dissatisfied Babak and the homesick Neda.

Early scenes establish their tender yet slightly tense relationship. They have dinner at another couple’s house, but once they break off into groups with their respective friends, they let slip that things are less than perfect. Granted, these kinds of scenes are needed in a horror film, but the actors do a fine job of selling the material. We buy into them, even if we’re unsure of what’s to come.

“The Night” is the debut feature by Iranian-American director Kourosh Ahari and he displays a remarkable command of horror’s most essential components: timing and tension. The film really kicks off when the couple arrives at the Hotel Normandie and has a strange albeit harmless interaction with the desk clerk (George Maguire). The detached delivery of the clerk, coupled with sudden close-ups of room keys and clanging bells, give the whole thing an unsettling feeling without stating the cause. It’s a great indicator of the night to come.

Things rapidly spin out of control. A homeless man seems to tail Neda everywhere she goes, and once Babak and Neda get to their room, they come across a threatening photo of their infant daughter sleeping and begin to notice an ominous stray cat. These devices provide some genuine scares, but more importantly, they serve as the motivation for Babak and Neda to push further into their nightmarish experience.
​
The score does wonders to sell the disorientation of the characters. The film’s composer, Nima Fakhrara, plays with lo-fi vocals, feedback, and droning sounds throughout, which are sometimes stretched out to the point of being unrecognizable. They further the sense that something is terribly wrong, and they do so in a way that’s familiar, with human voices, without being comforting. It’s a neat bit of artistry that serves to heighten the film’s most unsettling moments.

The performances are also suited to the genre. Shahab Hosseini rides a fine line between being a caring husband and frightened victim, and Niousha Jafarian bounces off of him beautifully as their stress levels escalate. It never feels as though they are making dumb decisions or acting impulsively but are thoughtful, rational people trying to figure their way out of a hellish environment. Hosseini is particularly mesmerizing in the last scene, which has no dialogue and no other actors. He makes you feel every bit of relief, horror, and confusion.

The screenplay by Ahari and Milad Jarmooz is well-written, with a series of set-ups and payoffs that feel satisfying without being predictable. They generate legitimate stakes for the characters, but they also succumb to one too many tropes come the film’s midpoint. I’m all for languishing in the creepiness of a haunted hotel, but there’s a twenty-minute stretch where it feels as though the momentum has halted, and the characters are stuck in place, reacting to various scares. The momentum and the pacing had been relatively good up to this point.

“The Night” manages to regain its stride come the final act, and the ending is a chilling showcase for actor and director alike. I just wish Ahari had trimmed a few minutes in the middle or opted to explore a different facet of the characters instead of relying on scares we already got. Overall, I’d say “The Night” is a very strong showcase for Kourosh Ahari. He has an intuition for staging and framing and a keen sense of timing that keeps the viewer off balance. He understands the mechanics, even if the structure has some excess parts. I suspect Ahari could make a horror classic in the future if his writing rises to the caliber of his presentation.