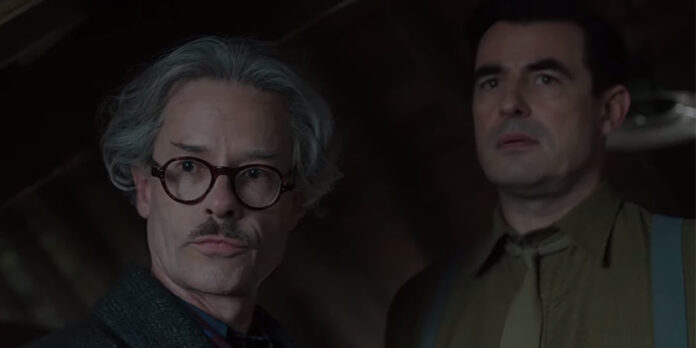 THE STORY – A soldier investigates a renowned Dutch artist who is accused of conspiring with the Nazis.

​Dutch painter Han van Meegeren was one of the most successful art forgers of all time but was put on trial following World War II for selling a famous painting to a high-ranking Nazi during the war. This fascinating true story is the basis for Dan Friedkin’s directorial debut, “The Last Vermeer.” Originally titled “Lyrebird,” the film is based on the 2008 book “The Man Who Made Vermeers” by Jonathan Lopez with a screenplay by John Orloff (under the pen name James McGee), Mark Fergus, and Hawk Ostby. Unfortunately, the film doesn’t live up to its source material and gets sidetracked with its less interesting main character.

The film opens in May 1945 in post-war Holland where the Allied Forces are helping the Dutch round up the last of the Nazis. Captain Pillar (Claes Bang), a Jewish army officer who was a tailor before the war, is dedicated to finding those who might otherwise escape justice. Artist Han van Meegeren is arrested for selling a painting by revered artist Vermeer to Hermann Göring, one of the most powerful members of the Nazi party, for a large amount of money. However, the thing that might save him is the fact that the painting was a fake — if he’s willing to admit it.

The film delves into some interesting themes from what art is and what its worth is to the morality of profiting off of war. Pillar himself is a pianist who stopped playing and van Meegeren encourages him to start again. It also delves into the corruption of the Ministry of Justice in Holland and how some people who were on the losing side of the war got away with it by knowing the right people. Pillar’s obsession with proving that van Meegeren was sympathetic to the Nazis almost feels like a personal vendetta against others who are getting away.

Pearce’s performance as van Meegeren is by far the best part of the film. He’s full of charm and liveliness and in the courtroom scenes near the end is jovially flippant. The courtroom section is definitely where the film shines, partially because it allows the focus to rest on the most interesting character. However, as great as Pearce is, it seems a shame to make a film about such a fascinating subject and not allow him to be the true center of it. “The Last Vermeer” definitely stretches the truth and makes some bold claims about van Meegeren in the ending that seem directly opposed to the research that I did on him.

Unfortunately, most of the film is centered around the frankly uncompelling character of Pillar. It gets bogged down in his personal life, including his questionable treatment of his wife who was a spy for the Resistance during the war. The treatment of women in general in the film could be better especially as the most important discovery in the case is made by a woman, Minna (the underutilized Vicky Krieps), but occurs offscreen. The film also moves at a slow pace until it reaches the courtroom scenes in the third act.

Visually, the film is what you would expect of a World War II-era film in terms of lighting, cinematography, costume design, and production design. It’s unfortunate that it’s not a better representation of van Meegeren’s story, especially as the more compelling parts of the tale are only seen in brief wartime flashbacks. If “The Last Vermeer” had focused more on van Meegeren, then it could have been saved by Pearce’s performance, but he isn’t onscreen enough to salvage this movie.