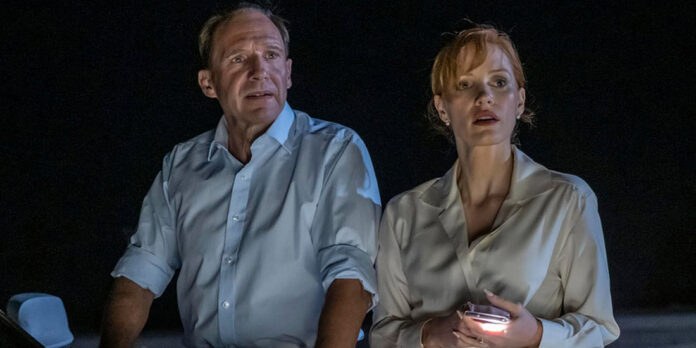 THE STORY – The Forgiven takes place over a weekend in the High Atlas Mountains of Morocco, and explores the reverberations of a random accident on the lives of both the local Muslims, and Western visitors to a house party in a grand villa.​
​
THE CAST – Ralph Fiennes, Jessica Chastain, Saïd Taghmaoui, Caleb Landry Jones, Matt Smith, Christopher Abbott, Ismael Kanater, Alex Jennings & Abbey Lee

​​Since the dawn of cinema, audiences have flocked to films about beautiful people doing ugly things. It’s a bit of a cliché at this point, the story of the wealthy, good-looking asshole who does something terrible and is made to pay for it and hopefully learns a lesson. John Michael McDonagh’s “The Forgiven,” based on the novel by Lawrence Osborne, is yet another take on this tried-and-true tale, with the added wrinkle of following the culture clash of white people in the Middle East.

On the way to an old friend’s party in the middle of the desert of Morocco, functioning alcoholic David Henninger (Ralph Fiennes) accidentally runs over and kills a young Moroccan boy while arguing with his wife, Jo (Jessica Chastain). Distraught, they put the boy in their trunk, and on the advice of their host, Richard (Matt Smith), they hide the car in the garage and call the police, who rule it a tragic accident. Then the boy’s father shows up to collect the body and insists that David journey with him to his home and help bury the body as a form of atonement. David, who seemingly hates everyone and everything and especially doesn’t like being told what to do by anyone, begrudgingly agrees to go even though everyone agrees that he only has a 50-50 shot at coming back alive. While David reckons with the fallout of his actions, Jo does her best to enjoy the laissez-faire debauchery hosted by Richard and his lover Dally (Caleb Landry Jones), especially the company of droll American businessman Tom (Christopher Abbott).

McDonagh sets up the film on an intriguing note, putting the end credits at the film’s beginning and running them backward. The opening montage of scenes tracking Jo and David’s journey through Morocco to Richard and Dally’s renovated ksour builds a strong sense of place as well as character. The script provides only a rough outline of who they are, but Fiennes’s prickliness and Chastain’s bored disgust with him flesh them out nicely. By the time they arrive at their destination, we may not like them as people, but it’s hard to deny that killing young Driss (Omar Ghazaoui) was a terrible, if avoidable, accident. David, in particular, shows such contempt for the world around him that it’s hard not to want to see him get his comeuppance. Thankfully, Fiennes charts David’s character arc expertly, making his transformation into a (slightly) better person entirely believable because it happens so gradually.

Unfortunately, the film alternates between David’s storyline and Jo’s in the second half of the film, and the scenes at Richard and Dally’s party are nowhere near as interesting. While McDonagh’s screenplay is full of great lines of dialogue (Tom saying that he got his hat in Casablanca only to look closer and see that it was made in China is a highlight), each scene makes the same point over and over again: These are wealthy people with nothing else to do but throw their money around, drink, smoke, and have sex with each other. Some may have more awareness of their privilege and more appreciation of the native culture (says Richard of the locals’ attitude towards wealthy white foreigners: “They just assume the worst, which make them right nine times out of ten”), but they’re still part of a system that is keeping the Moroccans in their service, whether directly (by hiring them as servants) or indirectly (by paying so much money for the fossils that seem to be the region’s main export). Each scene has at least one quotable moment that speaks to McDonagh’s talent as a writer. Still, as the film goes on, it’s hard to feel that they’re adding anything to the film other than length, especially when the story and performances in David’s storyline are so much more compelling.

That said, the cast is doing solid work all around. Chastain and Abbott throw off sparks together while Smith and Landry Jones lord over their domain with fun, odd-couple energy, and Marie-Josée Croze adds some spice as a sardonic French lifestyle photographer. Mourad Zaoui is fascinating to watch as the housekeeper Hamid. He has to straddle both the world of the local Moroccan staff (and Driss’s father) and his wealthy employers and their frivolous friends. But the stand-out performances, in addition to Fiennes, are Ismael Kanater and Saïd Taghmaoui. As Driss’s father Abdellah, Kanater keeps his anger and grief simmering inside, carefully choosing the moments to let them boil over so that we are kept in suspense for as long as possible as to what Abdellah wants from David. Taghmaoui has perhaps the most challenging role as the middle-man between Abdellah and David on their journey to bury Driss, pointedly friendly to David but maintaining an undercurrent of suspicion that makes it feel as though he could turn on him at any moment. The film is at its best when watching these three men interact and come to a deeper understanding of each other, making it even more frustrating that we keep leaving them to spend more time with the party guests.

In the end, though, the poor pacing and structure leave “The Forgiven” feeling like much less than the sum of its parts. Talented actors giving good performances in well-written scenes can only take you so far when the second half of your film drags, and it drags badly here. Cut a significant chunk of the repetitive party scenes to focus more on David’s journey, and this would perhaps feel more profound, and the inevitable ending would have more of an impact. But as it is, “The Forgiven” is a basic film; not bad, but not all that great, either.