“thank you for your service” 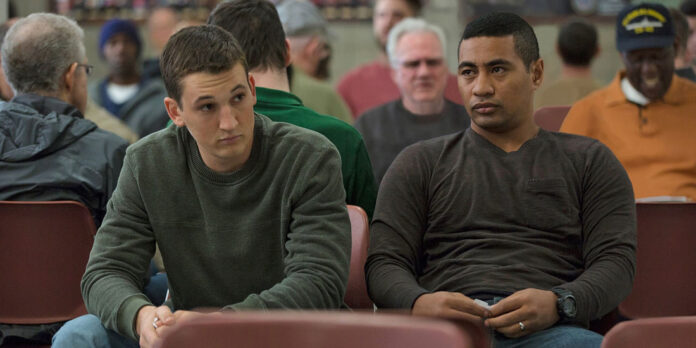 THE STORY – Sgt. Adam Schumann tries to readjust to civilian life after returning home from the war in Iraq. Fellow soldier Tausolo Aeiti must deal with the aftermath of a bombing that left him with a traumatic brain injury. Will Waller searches for normalcy after surviving several explosions, while Michael Emory must deal with the effects of a sniper’s bullet to the head. With memories of the battlefield still lingering, the soldiers soon begin their long journey to physical and emotional rehabilitation.

​”American Sniper” was a huge critical and financial hit three years ago as it explored one soldier’s traumatic experiences, dedication to the military and the post-traumatic stress disorder he carried back home with him afterward. That film went on to be nominated for Best Picture, Best Actor, and Best Adapted Screenplay. The screenplay was written by Jason Hall and now he is back with another script which he is this time directing called “Thank You For Your Service.” This follow-up film explores similar territory as “American Sniper” did but with a larger emphasis placed on the re-acclimation with civilian home-life after traumatic experiences overseas. Featuring Miles Teller’s best performance since “Whiplash,” “Thank You For Your Service” is an honorable and admirable effort from Hall. However, a few rookie mistakes as a director makes this dramatic story more uneven than anything.

“Thank You For Your Service,” tells the true story of Adam Schumann (Miles Teller), who after serving three tours in Iraq comes home to his wife (Haley Bennett) and his two children. Along with his buddies Tausolo Aieti (Beulah Koale) and Billy Waller (Joe Cole), he is going through PTSD after the death of his friend Sergeant First Class James Doster (Brad Beyer), his wife’s best friend’s (Amy Schumer) husband. Realizing that they may not be able to go on, the men voluntarily seek help from the U.S. Department Of Veteran Affairs in an effort to put their lives back together before its too late.

After giving a solid performance last year in a film which nobody saw called “Bleed For This,” perhaps more will realize what a talented actor Miles Teller is after he impressed us with “The Spectacular Now” and “Whiplash.” Here, he has the difficult task of portraying a man who is suffering from PTSD but also has the strength to voluntarily seek help for himself and his friends. It’s a very strong and dramatic performance from the thirty-year-old actor that will not garner him any awards recognition this season but will hopefully put him in a position to do so with whatever he does next. A surprisingly strong performance also comes from Beulah Koale, as a Samoan soldier that wants nothing more than to get back to the service despite having a baby on the way. He has one particularly horrifying scene, where he “goes for it” physically and the results are devastating. Unfortunately, his character becomes the victim of some sloppy writing in the third act involving some drug dealers and a series of bad decisions and this is where “Thank You For Your Service” begins to show its issues.

Jason Hall makes some clumsy mistakes as a director regarding the overall pacing of his film and the transitions from one scene to another. The film plays out more like a series of vignettes for each character that don’t ever seem to fully connect. And then there are the more glaring issues such as the rushed finale, the presence of Amy Schumer in a completely non-comedic role and the missed opportunity to more deeply explore the failure of the U.S. Department Of Veteran Affairs. The character’s experiences with the VA, as they wait in constant lines, only to have to wait even longer (Sometimes months) for clinical help and then they have to deal with their superiors and commanding officers telling them how beneath them it is to actually seek help in the first place, is the real highlight of the film. It’s a shame that Hall could not center his screenplay on this aspect more, as it is a side that most cinemagoers are not accustomed to when they watch PTSD war films.

While I admire that “Thank You For Your Service” focuses on its characters and their time back at home as opposed to the more “action” based beats from their time in Iraq, Jason Hall (As a first time director) still manages to make a few mistakes along the way. The end result is a respectable debut that isn’t perfect by any means but is also not an outright disaster. Miles Teller continues to find new ways to impress as a dramatic actor on the rise and will undoubtedly get his share of awards for a role some day. It just is not going to be this one. Thank you for your service boys. Let’s see what you come up with next.