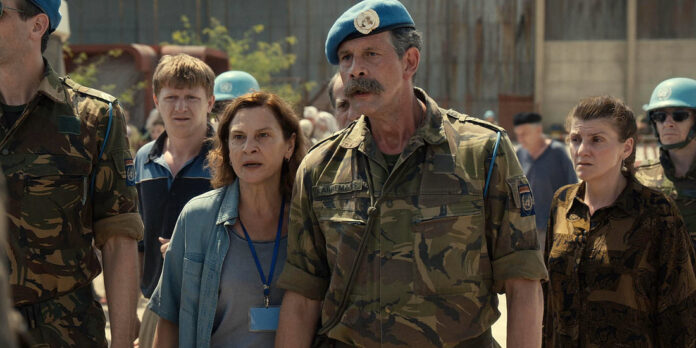 THE STORY – Bosnia, July 1995. Aida is a translator for the UN in the small town of Srebrenica. When the Serbian army takes over the town, her family is among the thousands of citizens looking for shelter in the UN camp. As an insider to the negotiations Aida has access to crucial information that she needs to interpret. What is at the horizon for her family and people-rescue or death? Which move should she take?
​
THE CAST – Jasna Đuričić, Izudin Bajrović, Boris Isaković, Johan Heldenbergh, Raymond Thiry, Emir Hadžihafizbegović & Edita Malovčić​
​
THE TEAM – Jasmila Žbanić (Director/Writer)

​In film, there are some faces you know you can rely on. Faces that tell a character’s story before you even know any details about them. Jasna Đuričić has one of those faces. Every line on her increasingly furrowed brow tells a story – this woman has lived a life. Her smile will warm your heart, but she has seen hardship. And in the fires of that hardship, she has forged a will of iron. She will do what needs to be done, and you would do well to listen to her advice. It’s a face that can blend into the crowd when needed, but once you’ve been confronted by it, you will never forget it. It’s entirely to the credit of director Jasmila Žbanić that she seemingly built the whole of her latest film, “Quo Vadis, Aida?” around Đuričić face. As the rest of the increasingly large cast of characters swirl around her, Đuričić remains an anchor, something we can grab onto amidst all the chaos.

Žbanić’s gut-wrenching dramatization of the 1995 genocide in Srebrenica begins with tensions already high. Đuričić’s Aida is a translator with the United Nations currently trying to keep the peace in the region as Ratko Mladić’s Bosnian Serb army advances on the town. As Aida translates for UN colonel, Thom Karremans (Johan Heldenbergh), and the Srebrenica mayor, it becomes clear that something is wrong. Karremans is making an impassioned plea, but no one seems to trust him. Aida stays as stone-faced as she can, but even she seems to bristle when the colonel promises air strikes on the Serbs if they break a new ultimatum. The UN Dutch peacekeeping contingent at a UN hangar in Srebrenica lets in 5,000 people. Still, Mladić is advancing ever closer, and everyone knows what his arrival will mean if they aren’t in the safety of the UN’s space.

Aida’s role as interpreter allows her to be privy to a lot of information her fellow Srebrenicans aren’t, and she is fully aware of the situation and her role in it. But as events start snowballing, and the UN leadership proves to be more ineffective bureaucrats than peacekeeping soldiers and powerless to stop Mladić, Aida finds herself in a fight for her life and the lives of her husband and sons. We already know how the situation in Srebrenica ends, which gives the film the heft of a Greek tragedy. All we can do is watch from the edge of our seats as the increasingly desperate Aida keeps trying and failing to make any lasting difference in the lives of her country, her town, and her family. Žbanić finds a perfect balance between the massive scale of the historical events with the intimate, personal story of Aida and her family. She carefully chooses the moments where she zooms in on Aida’s plight and where she pulls back to show the horrifying bigger picture. One shot of the sea of people desperate to enter the UN compound after they’ve barred any further entry is particularly stunning in its scope.

There’s only one place where Žbanić stumbles: A mid-film flashback to an ‘80s beauty pageant in which Aida is competing for Bosnia’s Best Hairstyle. It’s there to show us the vibrancy of life in Srebrenica, a time when Aida and her husband were younger and happier. But the strength of Žbanić’s direction and Đuričić’s great performance are such that we don’t need this scene to show us that. The slowly but steadily growing tension of the film doesn’t need the release valve the scene offers, either, because it’s so gripping that we just want to know what happens next.

That minor misstep is easily forgiven, though, thanks to the simple power of the film’s harrowing conclusion. An epilogue, set some time after the Bosnian war, focuses on the human cost of surviving such an event. Even at the most intimate emotional moment of the film, Žbanić manages a stunning balance of the personal and the communal, letting the audience reckon with what the people of Srebrenica lost, as well as what Aida herself has lost. Žbanić’s perfect braiding of the personal and the political throughout the film is fully revealed here, as we see Aida as not just herself, but as a mother to all the people of Srebrenica. And once again, Đuričić proves herself an invaluable asset, using her face to say all that words cannot, because what words can possibly sum up the atrocities committed during the Bosnian genocide? “Quo Vadis, Aida” proves essential viewing because of just how powerfully it uses visual storytelling to make its audience understand every aspect of this unimaginable tragedy, without ever feeling dour or heavy-handed. It is an unforgettable experience, and from its tense opening through to its heartbreaking final shot, it’s one that’s impossible to look away from.