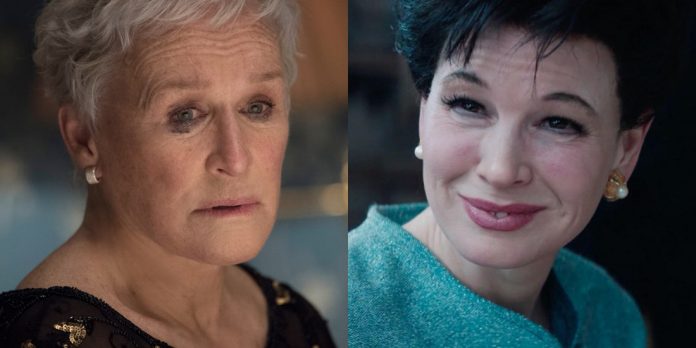 ​One of the most common topics among pundits and Film Twitter since last year’s Academy Awards has been the shocking result of the Best Actress race. The vast amount of people predicting Glenn Close to prevail for “The Wife” was astronomical; aside from the few outliers, almost no one was considering Olivia Colman for “The Favourite” in a serious way. Close’s upset was such a shock that it has defined the conversation around the current Best Actress race. Many people have subscribed to this basic reasoning as to why Close lost and Colman won: “The Wife” was only nominated in Best Actress and “The Favourite” was a Best Picture nominee; therefore, more people saw the latter rather than the former, thus voting for what they saw. The argument is also contingent upon, by a film receiving more than one nomination, a certain level of passion from other groups is displayed. Frankly, I have never agreed with this as a write-off of the Best Actress result.

​What’s worse, I see people applying the theory to this year’s field and it’s creating a frustrating conversation about predicting the category. People have used Close’s loss to completely write off and bury Renée Zellweger’s performance in “Judy.” For however impressed people are with Zellweger’s individual work, “Judy” is generally seen as a weaker, conventional film as a whole. Many don’t believe it has a chance to receive any other nominations, though it’s clearly in the running for a Makeup and Hairstyling mention. Almost every conversation about Zellweger and “Judy” automatically gets linked to Close and “The Wife,” as a way of debilitating the fact that she is a frontrunner. The sole beneficiary of this narrative is Scarlett Johansson for “Marriage Story,” which is seen as a comparable script-heavy, actor-friendly, likely Best Picture nominee to “The Favourite.” This is despite the fact that Charlize Theron may also end up starring in a Best Picture nominee, “Bombshell.” Theron, if anyone, is going to be an alternate to Zellweger. “Bombshell” earned four SAG nominations, so it’s bound to win something there and possibly at the Oscars, based on its obvious strength with actors and the acting branch.

ACADEMY TASTE AND CHARACTER TYPE
Judy Garland is a Hollywood legend. She’s one of the most recognizable people in the world, to the general public from “The Wizard of Oz” and to older Academy voters as an icon whom they respect. The Academy has proven, despite how strong or weak a performance is, they have a tendency to be drawn to real-life stories about musicians. Think Reese Witherspoon as June Carter in “Walk the Line,” and Rami Malek as Freddie Mercury in “Bohemian Rhapsody.” Zellweger delivers this with an even more intimately Hollywood figure as Judy Garland. And her work is even pulpier and heavier than the usual. The weight and incessant overt acting of Zellweger’s performance is comparable to that of Cate Blanchett in “Blue Jasmine.” If Zellweger does win, this would be the “biggest” Best Actress performance to win since Blanchett in 2013. The bigger and the showier the better when it comes to the Oscars. Add that quality onto the musical biopic genre, it’s much more of an appeal to the Academy than simply the internal, generic character Closed played in ”The Wife.” Thematically and stylistically, Zellweger is closer to Colman’s over-the-top performance as the real-life figure of Queen Anne in “The Favourite.”

THE POWER OF PASSION
Last year, there was a genuine passion for Olivia Colman’s performance in “The Favourite.” When people talked to Academy members, or when interviews were transcribed with anonymous voters, mention of their love for what Colman put forth in “The Favourite” was always a fact. Even in my own life, older people would say to me, “Glenn Close should win. How doesn’t she have an Oscar yet? But I just loved Colman.” There was a genuine passion for her performance as Queen Anne that Close’s work lacked. When you listened to voters, electing Close felt obligatory and failed to have an inherent urgency. It’s difficult to win an Oscar when voting for someone feels like a chore, an item to cross off the list. In the end, the passion vote won out. When Julianne Moore won for “Still Alice,” she had passion behind her, as well as an overdue narrative. Close had too much of an overdue narrative and not enough passion for the objective work.

PAST PRECEDENT SHOULD’VE BEEN TAKEN INTO CONSIDERATION
This is perhaps the most important: Colman won the Oscar on the clear and same path that Marion Cotillard used to run to victory for “La Vie en Rose” in 2007. The parallels between Julie Christie and Cotillard’s race to Close and Colman’s are eerie. Christie and Close were both veteran actresses in old-age, starring in marriage dramas (Christie was nominated for “Away From Her”), who used modest acting styles and won the Critics’ Choice, Golden Globe, and SAG awards. Cotillard and Colman played real-life figures in European films, using expressive acting styles, who won the Comedy/Musical Golden Globe, BAFTA, and then eventually the Oscar.

The fact that so many of us mispredicted this is really on us – we were so blindsided because we weren’t looking at the right aspects of the race to judge. We should’ve seen this coming, due to the fact that Colman won the BAFTA and, yes, *the other* Golden Globe. Those prizes are just as massive in terms of impact as winning a Golden Globe and SAG. Winning the BAFTA is a better precursor to winning than most give it credit for. It’s an award that comes right before the Oscars, giving a more timely insight into the voters’ minds than other awards that occur earlier on, and it’s an actual voting body similar to the Academy’s. Unlike other precursors, the BAFTA voting isn’t composed of critics or journalists, and it’s not an isolated guild. We took for granted what a massive accomplishment Colman winning the Globe and BAFTA meant. Both of those awards felt inevitable because 1) the Comedy/Musical categories at the Globes aren’t as competitive as the Drama categories; 2) Colman’s British identity made it feel like winning the BAFTA was an isolated incident and a non-factor. Combine that with the distraction of Close’s overdue narrative most pundits got swept up in, and the easy Christie/Cotillard comparison. We have no one to blame but ourselves.

Colman didn’t win Best Actress simply because she was in a Best Picture nominee and Close wasn’t, there’s a more nuanced discussion here about the type of character/stories in the Best Actress race, where the voters’ passion is separate from campaign strategies, and that of past precedent. I hate to see Zellweger being written off using this theory about Colman/Close and the redundant and inaccurate comparisons of “Judy” to “The Wife.”

​So what do you think of my assessment? Who do you think is going to be nominated for Best Actress? Check out our latest predictions here and let us know your thoughts in the comments section below or on our Twitter account.