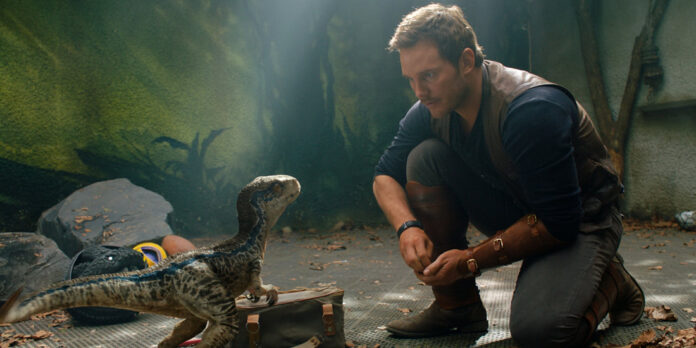 ​​​​Following the mixed reactions to 2015’s “Jurassic World,” expectation certainly wasn’t through the roof for the inevitable sequel. News of Colin Trevorrow’s move from the director’s chair and fully to screenwriting, passing the directorial baton to critically acclaimed director J.A. Bayona (“The Impossible” & “A Monster Calls“) would have come as welcome news to the franchise’s critics, and in “Fallen Kingdom” we do get something which feels very different than the previous film which came before.

Building on the events of the first film, Jurassic World is now an abandoned island with an active volcano ready to blow at any minute – a strangely relevant plot point considering recent events in Hawaii and Guatemala. The world, now used to dinosaurs existing again, are divided into those willing to let them die, and those desperate to save them. Immediately the film establishes its emotional core; though it does feel dated to continue discussing the ethics surrounding genetic engineering, placing it within the context of animal rights and biological warfare gives it a relevance today’s audience can really get on board with.

Claire Dearing, played by Bryce Dallas Howard, is now an activist lobbying for federal funding to save the dinosaurs. Of course we know she will be dragged into action-paced life or death situation, and sure enough, a call from the wealthy Lockwood estate sends her on a quest, alongside her now-ex Owen Grady (Chris Pratt) to return to the island. However, Lockwood’s plans to provide a natural sanctuary for the dinosaurs may not be all it seems.

Pratt is the star of this movie. Universal know this, and we expected it. This is made abundantly clear by the almost cheesy, classic Hollywood we-can-only-see-his-back reveal where he then turns his head almost to the camera as if to say “I’m here.” Pratt has become typecast as the charming guy who does blockbusters, and he knows how to play the part, giving enough to help us care about his character without detracting from the action. Howard, in contrast, is still trying to justify why she deserves a place in one of the most successful movie franchises of all time. Daniella Pineda and Justice Smith provide great supporting performances and are overused, but will hopefully take a more prominent role in the next (Once again, inevitable) installment. The same cannot be said for Jeff Goldblum who, reliably as ever, puts in a memorable turn, but is vastly under-utilized, providing nothing more than a bookend for the narrative to the original films directed by Steven Spielberg. Considering how much Universal used him to sell the movie and how sparingly he is used, I would not get your hopes up that this will rival anything he did in “Thor: Ragnarok.”

One of the most famous aspects of this franchise, besides Goldblum, is its iconic score by John Williams. One of cinema’s greatest pieces of music, it is sensitivity used, employing nostalgia when called for, but punctuating a progressive story with an original composition. Michael Giacchino has done a great job in finding this balance and creating a score that compliments exactly what Bayona was trying to deliver. The narrative is well-paced, with a strong tempo balancing exposition with action, never overloading us with effects, but refusing to let us dwell on too much unnecessary character development. It’s also well shot as Bayona re-teams with his go-to Dp, Óscar Faura, to create some colorful and memorable images.

Skeptics of “Fallen Kingdom” may be using the trailer to draw parallels with “The Lost World” – the second part of the original trilogy, and with good reason. It’s no surprise that the dinosaurs are taken from the island, and they do end up kind of loose on the mainland, but stay positive – it might not transpire in exactly the way you anticipate, and trust me that’s a good thing. That said, there are moments which feel a tad contrived and unoriginal, but not unbearable.

The reason to be excited about “Fallen Kingdom” is not so much due to the film in isolation – it is an enjoyable family-friendly adventure film – but because of where it has taken us in preparation for what I expect to be a trilogy. You could even draw parallels to the new “Planet Of the Apes” series in how the emotional arc across the trilogy is being set up, and the moral center of the story has been carefully redefined to facilitate this. In ‘”Jurassic World” the dinosaurs fought back – humans empowered them to challenge their imprisonment, and the film, much like “Rise of the Planet of the Apes” highlighted the downfalls of human greed – a modern-day Icarus tale. In “Fallen Kingdom” the boundaries between good and bad were blurred further, where humans and dinosaurs chose sides not based on biology but character, as Owen and Blue reconnect and work together to save the group. This has perfectly established a motive for the third film – war. “Fallen Kingdom” will be underrated this year because of other blockbusters that have already come out this summer and because of the lukewarm reception its predecessor received (Despite grossing a billion dollars at the worldwide box office) – it’s neither the biggest blockbuster nor the best-made film of 2018, but it is highly recommended nonetheless. Critics of “Jurassic World” will hopefully be pleasantly surprised.