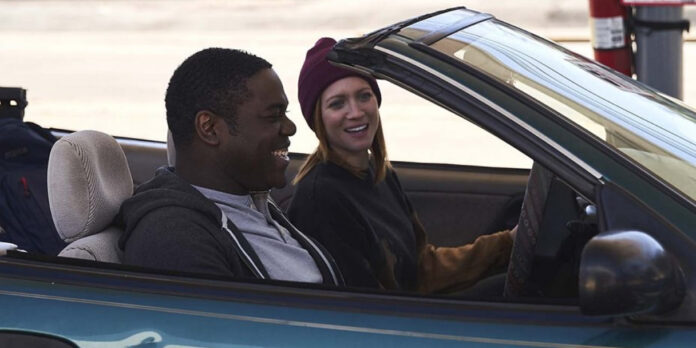 THE STORY – A cynical writer and a hopeless romantic hit the road for a cross-country trip.
​
THE CAST – Sam Richardson & Brittany Snow

​​​​​​It’s a tale as old as time (or at least, as old as the movies): Nominally “bad” person meets “good” person under less than ideal circumstances. One of them sees an opportunity, concocts a scheme to use the other person to their benefit, and doesn’t tell the other about it. Over time, their more business-like relationship becomes something deeper, and just at the moment where a (usually romantic) connection is being forged, the true reason for them spending so much time together is revealed. Recriminations are spewed, feelings are hurt, lessons are learned, and everyone eventually grows as a person and the two come back together – the “bad” person having been at least mostly reformed.

“Hooking Up” is the most recent iteration of this oft-told tale. The “bad” person in this case is Darla (Brittany Snow), whom we meet in a killer opening scene having sex with a random man in an elementary school classroom (set to a soundtrack of children’s music) before she goes to a Sex Addicts Anonymous meeting down the hall. In the hallway, she meets the “good” person, Bailey (Sam Richardson), who’s on his way to a cancer support group before getting the latest scan results on his second potential case of testicular cancer. Darla has been court-ordered to attend her meeting after a sexual harassment suit, and after her boss finds camera footage of her having sex with an intern in the office, she gets fired from her job as the writer of a sex column for a local lifestyle magazine. When Bailey stumbles into the next SAA meeting, drunk over the news that his cancer has come back, and the fact that his high school sweetheart ex-girlfriend doesn’t want to see him anymore, Darla sees an opportunity to get her job back: Make “amends” to all the people she’s had sex with by going to all the places she’s had sex and having sex there now – older and wiser – with Bailey, while blogging about both her own experiences and his. Without his knowing, of course. Bailey has one condition: That they go to Dallas to visit his parents and attend a party for his ex’s mom.

From there, you can guess what happens, which means that the film ultimately lives or dies on the performances of its leads. Thankfully, both Snow and Richardson give really good performances and have great chemistry that sparks early before organically turning into something deeper. That something deeper never really registers as a romantic connection, though, just something more mature; something less than romance but more than friends. This isn’t a problem for the film, but the reason why it isn’t a problem is.

“Hooking Up” is a film that is afraid of sex. The most nudity in the film is a quick shot from behind after Darla has taken off her bra, which is shockingly prudish for a film about two characters fucking their way across the country (or at least the Southeast). Furthermore, in the context of the film, sex is primarily a dirty, nasty, shameful thing that’s only acceptable when it can be called “making love”. While it can be fun, that fun is ultimately hollow and leads to a hollow life. This, sadly, is another tale as old as time: Hollywood has always looked down on women who enjoy sex and usually punishes them in some way. To the film’s credit, Snow plays the role in a way that almost makes it seem as though Darla doesn’t really enjoy sex, but if that’s the case, why be a sex columnist? The film tries to argue that she’s a sex addict because of her mother, but the scenes between Darla and her mother are too half-baked to work.

All this is unfortunate because, despite the cliché storytelling, Snow and Richardson are fun to watch and the script (by Lauren Schacher and director Nico Raineau) has a few good chuckle-worthy lines, including one killer “The Fault in Our Stars” reference. But Both leads (not to mention the supporting cast, which includes Jordana Brewster and Vivica A. Fox) deserve better, though. They manage to elevate this tepid, wannabe-cool film that doesn’t deserve it.