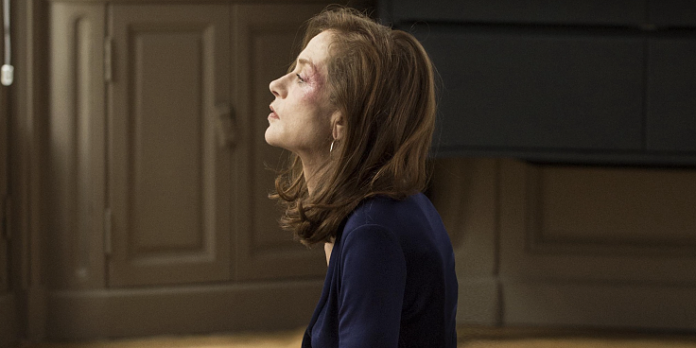 THE STORY – The successful CEO (Isabelle Huppert) of a video game company tries to learn the identity of the man who raped her.

​“Elle” was well on the verge of becoming one of my favorite films of the year. However, the third act has some questionable moral choice that did not seem thematically consistent and threatened to derail the entire film for me. What helps to keep the film steady is the excellent performance by Isabelle Huppert that is steely, dramatic and totally exhilarating. Paul Verhoeven keeps the story moving at a brisk pace that is always interesting, disturbing and at times, even empowering.

Michele is a successful owner of a video game company that is unexpectedly raped in her own home one afternoon. Due to her troubled past in dealing with the police, she decides to take matters into her own hands in case the perpetrator should eventually make his way back into her home. She casually tells her closest colleagues the truth of what happened and goes about her day-to-day routine, never forgetting and embarks on a cat-and-mouse game to discover who in her life wants to do her harm.

First and foremost, Isabelle Huppert deserves all of the recognition that is being thrown her way for her performance in “Elle.” While it may not rank against some of her career best work, it’s still one of her best and certainly one of the best of the year. Her character of Michele is one who responds to trauma in a unique way that will turn off many viewers but is none the less consistently engaging. The subject matter of rape, revenge, sexual desire and gender roles are explored here and may only serve to confuse those who are trying to crack the film’s overall message and themes. This is a challenging film that explores one character’s denial of her trauma and the type of person she becomes as a result of those decisions.

There is an interesting parallel in the story of Michele’s father and what revelations we learn about him and how Michele’s own attitude and behavior passes down to her own child. Michele’s son also goes through a form of denial to disguise his own possible inner turmoil and I find this aspect of the film to be the most rewarding thematically and on the page and screen. The scenes which the two share together and the underlying ideas and emotion which the two characters must be feeling is always captivating.

Paul Verhoeven who has quite the mixed filmography ranging from “Basic Instinct,” to “Robocop,” to “Starship Troopers,” to “Showgirls” shows a maturity and restraint here in how he presents the story. There are no flashy camera techniques or any large set pieces. There is, however, a skill of how he tells the story with vigor. His decision to open the film with the rape scene of Michele and have it referenced through clever editing throughout the film, making us wonder if what we’re seeing is a flashback, a fantasy or the future is fun and exciting. For a foreign language film (Which I typically struggle with in terms of pacing) this film never lags and was able to hold my attention throughout its entire 130 minutes running time. How others will be able to handle the over two-hour running time with such challenging subject matter though remains to be seen.

“Elle” is not a film for everyone and should primarily be seen by those who are fans of Isabelle Huppert (Who is excellent in this) and Paul Verhoeven who crafts one of his best films from a filmmaking standpoint in quite some time. The subject matter and how you respond to it, however, will depend on many factors. This is a challenging film which even I must admit I do not fully agree with nor did I fully understand once the film was over. However, upon reflection and talks with others, I do recognize that “Elle” is objectively a well-made and well-acted film. Personally, though, it left me troubled yet still fascinated.