Boseman vs. Hopkins: Two Giant Performances For The Ages 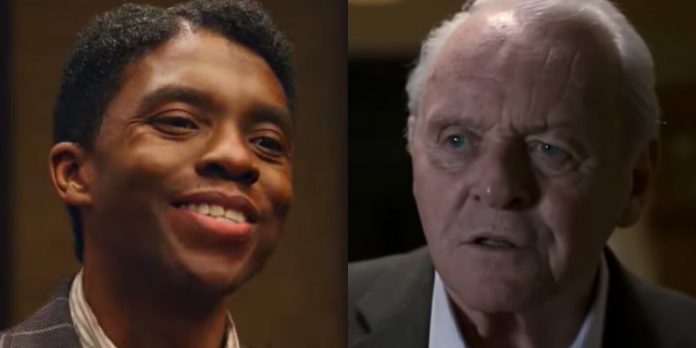 ​​Now that nearly all of the major Oscar contenders have been screened in some capacity, the predicted nominees in the acting categories are beginning to solidify. And Best Actor is quickly becoming the most exciting race of the year. There are plenty of contenders, but it’s beginning to look increasingly likely that it will be a showdown between two acting titans: Chadwick Boseman for “Ma Rainey’s Black Bottom” and Anthony Hopkins for “The Father.” Both men have several key factors that benefit them in different ways when it comes to securing the Oscar win. It also doesn’t hurt that they are delivering fantastic, career-topping performances.

With all the horrible things that this year has brought us, perhaps the most shocking was the tragic news that Chadwick Boseman passed away on August 28 at the inconceivably young age of 43. Starting with his film breakthroughs in the biopics “42” and “Get on Up,” it was immediately clear that Boseman was a young actor with great potential and a future Academy Award was a definite possibility. After achieving global fame with his iconic performance as the Black Panther in the Marvel Cinematic Universe, this year he brings us a performance with definite awards potential. His role in the film adaptation of August Wilson’s “Ma Rainey’s Black Bottom” as the trumpet player Levee has already received acclaim from the handful of critics who have seen it and has since been named as one of the top contenders for Best Actor by many Oscar pundits.

Boseman’s untimely passing brings an unexpected element to his Oscar path. Posthumous nominations, and even wins, are not unheard of for actors. A total of seven performers have received posthumous acting nominations: Jeanne Eagels (“The Letter”), James Dean (“East of Eden” and “Giant”), Spencer Tracy (“Guess Who’s Coming to Dinner”), Peter Finch (“Network”), Ralph Richardson (“Greystoke: The Legend of Tarzan, Lord of the Apes”), Massimo Troisi (“Il Postino”), and Heath Ledger (“The Dark Knight”). Of this group of nominees, only Finch and Ledger went on to win. The most notable thing that all of these nominees have in common (except for Eagels, who was nominated at the 2nd Oscars ceremony well before the Academy had the chance to establish their typical patterns) is that they were all recognized for films that received significant nominations outside of their actors. This is important to note because posthumous Oscar campaigns are seemingly only successful if the film the performer is being recognized for is an overall Oscar contender. It also must be noted that the two actors who managed posthumous wins gave performances that were already earning buzz prior to their deaths. Finch passed away while promoting “Network” well after its release and Ledger’s performance was already being talked about with interest even before his shocking death. Both of these factors are true of Boseman’s performance. “Ma Rainey’s Black Bottom” has been an Oscar contender since it was announced and Boseman’s role, in particular, was being singled out as a potential nominee long before his passing.

Further helping Boseman’s case is the fact that he has another performance that is gaining awards traction. His pivotal role of Stormin’ Norman in Spike Lee’s “Da 5 Bloods” has quickly become a solid contender in the Best Supporting Actor race. While his performance earned praise when the film was released this summer, Boseman’s passing brings an unintended additional layer of emotion to his ethereal performance. It is entirely within the realm of possibility that Boseman will be a double-nominee at this year’s Oscars. Now, any Oscar expert will tell you that two nominations in one year is in no way a guarantee for a win (just ask Scarlett Johansson, a double-nominee just last year). At the same time, it certainly doesn’t hurt either. Having two performances in one year that are both seriously contending for awards can often signal overall support for an eventual winner. Such was the case for Jamie Foxx who was nominated for both “Ray” and “Collateral” in 2004, with the former film proving to be his winning role. Kate Winslet had a similar narrative in 2008 when she was in contention for both “Revolutionary Road” and “The Reader,” the latter ended up providing her path to the Oscar stage. And while she may not have been nominated for it, her work in “Revolutionary Road” undoubtedly aided in her victory. Such may be the case for Boseman – even if he isn’t nominated for “Da 5 Bloods,” it will certainly be on Academy voters’ minds when considering his work in “Ma Rainey’s Black Bottom.”

​While he has many paths to a victory, the Oscar is far from locked for Boseman. His fiercest competition comes from Sir Anthony Hopkins for his moving, impactful performance in “The Father.” The veteran actor is already an Oscar winner for “The Silence of the Lambs” and this would mark his return to the Oscar stage for the first time in 29 years. If he were to win, the only performers with longer gaps between Oscar wins would be Helen Hayes, with 39 years between her wins for “The Sin of Madelon Claudet” and “Airport” and Katharine Hepburn, who had 34 years between her first Oscar for “Morning Glory” and her second for “Guess Who’s Coming to Dinner.” Not to mention, he would tie Meryl Streep, who had 29 years between her second Oscar for “Sophie’s Choice” and her third for “The Iron Lady.” Hopkins would also become the male performer with the longest gap between Oscar wins, surpassing Gene Hackman’s current record of 21 years between his wins for “The French Connection” and “Unforgiven.”

It is not uncommon for stalwart performers to receive two Oscars with a significant gap between their wins. Indeed, it almost seems as if the first Oscar is for the Academy’s recognition of an exciting talent in the relatively-early part of their career whereas the second Oscar serves as vindication for their initial acknowledgment. Such was the case for Marlon Brando, Jack Lemmon, and Frances McDormand. While “The Silence of the Lambs” was hardly a breakout performance for the then 54-year-old Hopkins, it was his first nomination and thus the first time the Academy seemed to take notice of his talents. While this may not constitute the typical “overdue” narrative that is usually applied to first-time winners, the drumbeat for an actor to receive an additional Oscar can often be just as loud. Such was the case for Cate Blanchett’s second win for “Blue Jasmine” and it even worked to secure Meryl Streep her third Oscar for “The Iron Lady.” Hopkins fits neatly into this category of previous Oscar winners on the hunt for another statue. And while his first Oscar was for the category of Best Actor, his role in “The Silence of the Lambs” is often considered by some to be a supporting role. A win for his undeniably leading role in “The Father” could potentially serve as a rectification for this alleged category fraud.

Beyond the history and the statistics, Hopkins’s performance is awards-worthy on its own. It is a loud, showy role – exactly the type of work that the Academy likes to award. He gets to play a whole array of emotions and the film builds to a highly upsetting and moving conclusion for his character. In terms of parts for an elder statesman actor, this is a dream come true, and the vulnerability and versatility that he displays are admirable for an actor of any age.

While these two men may be the leading contenders for Best Actor, this awards season is far from over. There is formidable competition from Gary Oldman (“Mank”), Delroy Lindo (“Da 5 Bloods”), Riz Ahmed (“Sound of Metal”), and Steven Yeun (“Minari”) among many others. Whether Boseman wins, Hopkins wins, or neither wins, what is certain is that they both give performances this year that will define their careers and be included amongst the best work of their illustrious filmographies.

Who do you think is going to win Best Actor this year? ​Whoa re you predicting to be nominated? Check out our latest Oscar predictions here and let us know in the comments section below or on our Twitter account.