“BAD TIMES AT THE EL ROYALE” 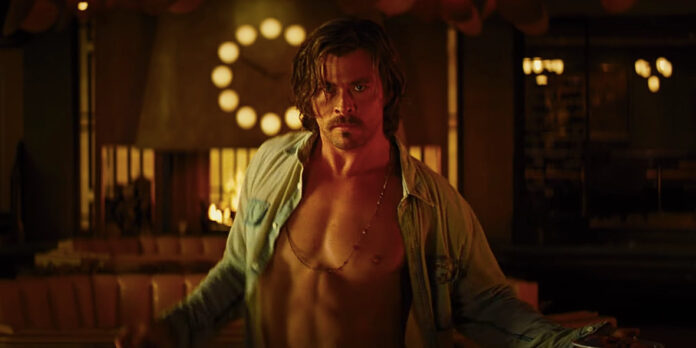 THE STORY – Seven strangers, each with a secret to bury, meet at a run-down hotel in Lake Tahoe in 1960s California. Over the course of a fateful night, they all get one last shot at redemption before everything goes wrong.
​
THE CAST – Jeff Bridges, Cynthia Erivo, Dakota Johnson, Jon Hamm, Cailee Spaeny, Lewis Pullman, Nick Offerman & Chris Hemsworth

​​​​​​I am not a director, but I would imagine a writer/director’s biggest fear is that their movie contains more style than substance. Drew Goddard, the undeniably talented director of “The Cabin In The Woods” and Oscar nominee for writing 2015’s “The Martian,” may be facing a bit of that fear this week with the release of his newest film “Bad Times At The El Royale.” Set in the late ‘60s, with an all-star cast of characters played by Jon Hamm, Dakota Johnson, Chris Hemsworth, and Jeff Bridges, “Bad Times At The El Royale” finds seven strangers all arriving at a run-down, bi-state hotel in Lake Tahoe, California. Put in a series of dangerous and surprising circumstances, they must survive the night after their separate conflicts converge into one giant detonation.

The ‘60s vibes are strong in this film, with every aspect of the production including the sound and costume design dripping in the hippie and swing styles of the time. The hotel itself is decked out in gorgeously chintzy furniture, carpeting and decor, which really sets the stage for some of the wildly contrasting storylines. The music is all ‘60s, with plenty of needle drops and straight up conversations about the cultural importance of the music industry. One of the main characters is even an aspiring Vegas singer named Darlene Sweet (Cynthia Erivo), who forms a tenuous friendship with Father Daniel Flynn (Jeff Bridges) and teaches him what music means to her. The style of “Bad Times At The El Royale” is tonally perfect and allows for all of the plotlines to shine without making an audience member stop and wonder if anything is too unrealistic for the world which Drew Goddard has crafted.

The production value sets the stage, but the performances are what gives Goddard’s latest film the most value. Jeff Bridges provides a heart-wrenching portrayal of a man who would normally be very difficult to sympathize with while Chris Hemsworth looks to be having a tremendous amount of fun playing the kind of crazy character that reminds us of a younger Brad Pitt. But, as is common with so many star-studded ensemble films, there are unfortunately a lot of stars who are detracted from the overall experience. It felt as if Goddard wanted every character to be the lead, and as a result, the audience does not know where to place their focus making this ambitious effort feeling unfocused despite the technical precision at work. Each performance is serviceable to the genre pulp that Goddard is trying to sell us but every scene feels like it is missing something despite the extended runtime. You may spend fifteen minutes wondering what Dakota Johnson is up to while you’re spending time with Jeff Bridges, but then the moment it cuts to her, you are left wondering about what Jon Hamm is up to. It is a nearly impossible feeling to catch up with all of the characters in a way that ever feels wholly satisfying, leaving the editing of Goddard’s latest to be its ultimate downfall. While everyone performs their roles very well and the film can be vastly entertaining at times, there is simply not enough variety in the scale to keep us invested the whole way through.

The intersection of multiple storylines is always a difficult thing to pull off, and when you consider Goddard includes information spanning continents and decades, it’s hard to pin any faults on him, specifically. However, the film spends most of the time cutting between flashbacks, locations, and characters, to an unbearably confusing degree. Each story switch is preceded by a cliffhanger, which makes the movie feel like it begins and ends some 15 times before the end credits roll. The screenplay explains everything rather thoroughly, but the entire film begins to crumble underneath its own weight, especially once we pass the two-hour mark. A 140-minute long mystery with such intriguing characters should instill a feeling of satisfaction, if not eagerness to want to re-enter the world. Instead, this film leaves us feeling overwhelmed and confused, despite knowing all the answers by the time the credits roll. This feels like the kind of project which would’ve worked better as a miniseries, specifically focusing on each character per episode with a few moments where the character’s stories intertwined. Instead, this 60’s era set thriller feels more like a product of the 90’s instead of the modern new classic it so desperately thinks it is. In the end, I was sad to leave the El Royale so soon, but boy, do I never want to check in again.