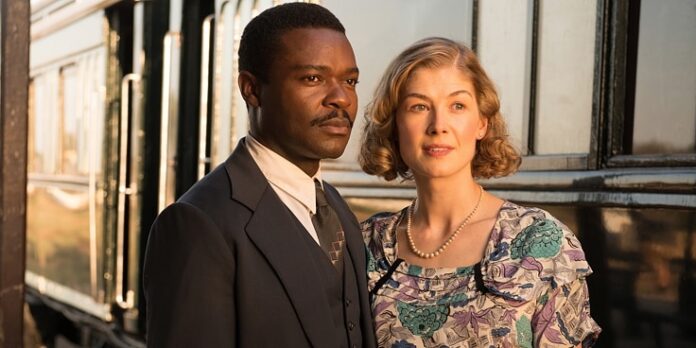 THE STORY – In the 1940s, Prince Seretse Khama of Botswana shocks the world when he marries a white woman from London.

“A United Kingdom” is in many ways like last year’s “Loving” where an interracial couple simply wants to live their lives together, while society tries to tear them apart. It’s an acting showcase for stars David Oyelowo and Rosamund Pike. Both have great chemistry with one another and the film’s central romance is believable. However, as a true story retelling, “A United Kingdom” plays itself very safe, which is odd considering how much was at stake in this true story.

Based on a true story, Seretse Kharma (David Oyelowo) meets Ruth Williams in London in 1948. Seretse is studying abroad while Ruth is an office worker, but she comes to learn that Seretse is really the Prince of Bechuanaland (Now called Botswana), located in Africa. He has been called back by his uncle (Vusi Kunene) to rule but before he goes, he makes the decision to marry the woman he loves. The marriage between Ruth and Seretse is not approved by the British or South African Governments, causing an international uproar and throws the kingdom’s chances for peace in question.

“A United Kingdom” works because of its two lead performances from David Oyelowo and Rosamund Pike. While they’re both not Oscar caliber performances, there still good enough to carry the movie through its brief 111-minute runtime. David Oyelowo pulls off a convincing accent, while Rosamund Pike reminds audiences that she’s not just the crazy woman from “Gone Girl” and that she has real layers as an actress, which is something that anyone familiar with her prior work will be well aware of.  British actors Jack Davenport and Tom Felton round out the proceedings with despicable gentleman-like performances which help to provide opposition towards Seretse and Ruth. The film’s cinematography, although not earth-shattering, does a fine job of showcasing the colorful contrasts between the dark and washed out England and the vibrant colorful Africa, while the music by Patrick Doyle hits the right notes to get audience members to surely shed some tears by the film’s final credits.

So why does “A United Kingdom” feel so flat and unremarkable? The film’s message, although heartwarming and well told is nothing spectacular. As I mentioned before, comparisons towards “Loving” will certainly abound resulting in this coming off as an imitator if anything. The film’s production elements are all solid and don’t detract from the experience, however, they also do not expand upon it either. For Seretse and Ruth, it was not just their marriage, or their very lives, but also an entire country and its people that were in jeopardy due to their union. We should feel those stakes while watching this film, but director Amma Asante is only half successful in translating those stakes. Guy Hibbert’s script is probably the film’s weakest aspect, as it is presented in a very simple and laid out manner, stripping the actors of the chance to explore any real complexities with their characters. There is a section within the movie where the focus is more set on Seretse and his journey to get back to his wife, while she is pushed towards the background and almost becomes forgettable. It’s one of a few problems with the film which holds it back from being something better.

Overall, “A United Kingdom” is a fine film with a nice pairing between David Oyelowo and Rosamund Pike. Both actors give commendable performances that will not gain they any awards attention but is enough to carry the movie past its other shortcomings. It’s not trying to be daring or push any boundaries but “A United Kingdom” is not trying to do that. It’s simply trying to tell a heartwarming true story about love and in that respect, it delivers.