“Searching” & A New Path For The Found Footage Genre 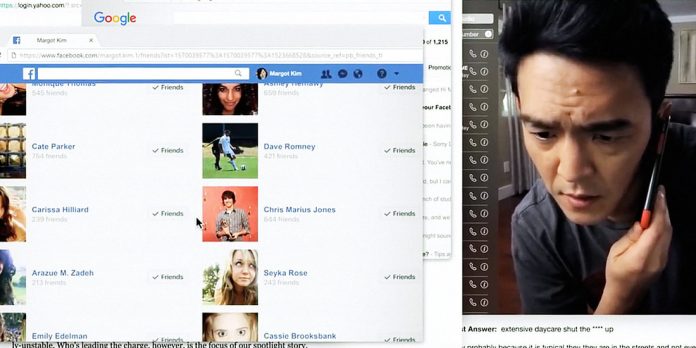 The medium of film is ever evolving as it shifts and discovers new territory for artists to work within. Whether it be the definition of what makes a film a specific genre or even discovering some new approach to the technical side of filmmaking and utilizing that for their stories, constantly looking for new ways to tell a story is in the blood of all filmmakers. With the release of this weekend’s “Searching,” we will be specifically taking a look at how the genre of found footage is starting to pivot in terms of how these films are being executed. But before we can see where something is headed, we should always take a look at where it began.

There have been several films that have popularized the found footage genre; “The Blair Witch Project” the “Paranormal Activity” franchise, “Cloverfield”, “[REC]”, and many others. As we’ve seen over the past several decades, found footage typically thrives when being utilized as either a horror or science fiction story. The first use of the found footage style that we have come to know over our lives is first seen in Ruggero Deodato’s “Cannibal Holocaust” in 1980. While the entire film is not shot in this style there are segments of the film that are told as flashbacks through this found footage approach. Deodato’s film caused a lot of controversy upon its premiere in Italy, leading to Deodato even being arrested.

While “Cannibal Holocaust” was the first film to use this style, the first film to utilize it and gain immense popularity was Daniel Myrick and Eduardo Sánchez’s “The Blair Witch Project.” Not only did “The Blair Witch Project” pull off the feat that all found footage movies attempted to pull off in the late 90’s and early 2000’s (which was to convince the audience that what they were watching was real), but it also made a boatload of money. Made with a small budget of $60,000, the film managed to gross $248 million dollars at the box office.

Found footage films have succeeded at creating a different type of atmosphere in their film language than the typical Hollywood style of filmmaking. They force a different level of immersion onto their audience that in the case of horror films will add an additional level of fear. Found footage films have always had the appearance of a low budget, gritty, in your face style. But recently it seems that we have slowly been moving in a different direction for found footage and that direction is rather exciting.

In 2014 Levan Gabriadze directed the horror film “Unfriended” that utilized the use of screen capture for a feature film. The entire film is told through the camera on a laptop and the screen of that same laptop. This opened up the door for Gabriadze to approach the scares of his horror film in a completely different way than the found footage films that came before. In the current digital age, this approach to filmmaking proved it that there was an interesting new approach to the genre of found footage, especially in terms of its social context.

To start, I think this style of screen capture opens up the genre to tell not just horror or sci-fi stories, which found footage typically favors. With the release of Aneesh Chaganty’s “Searching,” it is clear that this style of filmmaking works really well in the drama/thriller genre. Films with this style have no trouble keeping our attention because we are so drawn to what we could be missing on the computer screen. We are constantly on the search for something that is happening on screen that we could be missing.

While this format does not typically fit what started found footage with technology becoming an increasingly bigger part of our lives, this new format seems to be most fitting for our own daily lives. Not only does it serve the same basic function that classic found footage films would serve, but it also offers a tad more room to play around narratively and stylistically. More can be created within this digital space to force the audience into a more uncomfortable place than usual when watching this type of film. It can force a certain sense of intimacy on its audience so that with each frame that passes our eyes, it feels completely realistic and gripping.

One thing that forces us to connect with what is happening in this style of filmmaking is the use of the laptop camera. Both in “Unfriended” and “Searching,” we get to be front and center with the characters the film surrounds. The film is practically told entirely in close up. While there are typically no cutaways or inserts which provides a disadvantage to using editing as an emotional tool, it instead creates new meanings within the atmosphere of the film, the script, the dialogue between characters, and the performances those actors must now carry with this weight.

Found footage has slowly been dissipating from the public eye but I think this new style of filmmaking could return the genre back to its former glory and open up more possibilities for storytelling. With the classic found footage approach, we did not have to try any harder to suspend our disbelief than any other film and I think that the same rule applies here. We’re in an age where people watch other people play video games online for entertainment, so an entire feature film based around an audience watching someone’s computer screen for two hours is an easily conceivable idea.

Not only will this style open up the door for other genres, like it has for “Searching” but I believe it could return found footage to a more popular place within moviegoers’ hearts. Filmmakers could tell different kinds of stories within this genre and these stories can be just as intriguing as a classically made film. We are moving into what could be a fascinating new format for a genre, one that is both exciting and interesting as a whole.