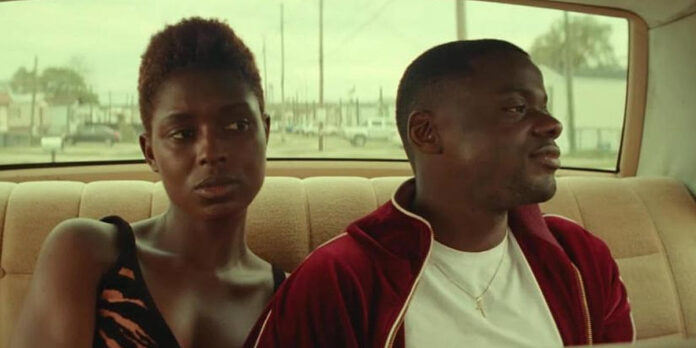 THE STORY – Slim and Queen’s first date takes an unexpected turn when a policeman pulls them over for a minor traffic violation. When the situation escalates, Slim takes the officer’s gun and shoots him in self-defence. Now labelled cop killers in the media, Slim and Queen feel that they have no choice but to go on the run and evade the law. When a video of the incident goes viral, the unwitting outlaws soon become a symbol of trauma, terror, grief and pain for people all across the country.

​Getting the opportunity to tell more diverse stories is something the entertainment industry at large still struggles with. There’s still a long way to go until that playing field is completely even, but it means that one should relish the chance to check out these stories whenever possible. Many of them come from politically charged perspectives that strike a timely chord within our society, giving all the more reason to seek them out. That’s definitely the perspective “Queen & Slim” carries, which bolsters some strong elements but is hindered significantly in the way its story chooses to unfold.

Directed by Melina Matsoukas, the film begins with the first date of our main characters, where young Slim (Daniel Kaluuya) and his date, Queen (Jodie Turner-Smith), are having a bristled yet respectful interaction. Their evening takes a grave turn when they are pulled over. After an altercation with an antagonistic officer, the policeman ends up dead at the hands of Slim. As a result, the couple leaves the scene of the crime, embarking on a journey as fugitives. Their ultimate plan is to escape the authorities, and along the way, they come across many people who are sympathetic to their situation and even offer help. As they head toward a new destination, these two make a deeper connection with each other along the way.

As is often the case with stories that mainly revolve around two characters, it’s the strength of those performances that will determine how effective a film can be in establishing a connection with the central plight. Fortunately, Kaluuya and Turner-Smith do an incredible job of inhabiting characters that grow and change in authentic ways. Kaluuya has an easy charm that masks insecurities, which become hardened, transforming him into a man with a more complicated worldview. Turner-Smith shows a great strength that begins to allow a sensitive vulnerability to seep through. Both of them are fantastic in making these roles compelling, and the chemistry they share with each other is energetic, as well.

The supporting cast has some good players, though their effectiveness can often range from quite appealing to broad and distracting. The absolute best of them is Bokem Woodbine, who plays Queen’s uncle and helps the couple at an important juncture. He provides a great deal of energy at a point in the film when it’s desperately needed, and not only gives off charm and humor but also showcases a rather complex character. Uncle Earl is not entirely good or bad, but has a sympathetic disposition and is completely fascinating. Much of that comes from Woodbine’s performance, and he is one of the film’s great assets.

Melina Matsoukas also does a great job in directing the film, offering a moody and tactile world that’s full of vivid life. Every frame feels finely rich with character, both on a literal and thematic level, and it’s truly astounding to see how confident the filmmaking is here. Matsoukas creates a true sense of this world, one that feels vibrant with a celebration of these people’s lives, as well as the encroaching danger that lurks all around. With gorgeous cinematography and an energetic soundtrack, all of the technical elements are utilized quite well.

Unfortunately, the majority of the film’s issues come from Lena Waithe’s screenplay. There are elements to the script that are interesting, particularly in how racial violence creates a resonating legacy of its own and serves as the foundation to inspire others to action. At the same time, the road to get the story to many of these conclusions is filled with endless conveniences and contrivances that add up to a frustrating watch. It’s here were some of the explorations feel more surface level and cheap. In addition, there’s an exploration into how the actions that force these political movements have a sense of destiny tied to religiosity, and it was a commentary that felt quite off-putting. The script rarely progresses in an organic way, which exacerbates the pacing issues and puts up resistance into truly throwing oneself into this world.

The forces that come together in the writing and directing are truly special. They help to give the world of the film a lot of texture and intrigue, and they are the elements that one responds to the most. It’s quite disappointing, though, that the screenplay lets the film down so much, constantly stretching believability with the way it’s progressed and establishing roadblocks to the more engaging elements. Still, the film makes an interesting statement from a perspective that needs to be heard more. If just for that, it makes itself worthy to be seen.